As the UK's leading garden machinery store, we are constantly expanding our range of goods with new, innovative and exciting products to take advantage of new technologies and engineering developments. Just as plant breeders come up with new varieties each year and expand their offerings so machinery companies develop and refine their lists, so here…Continued
January 17, 2017 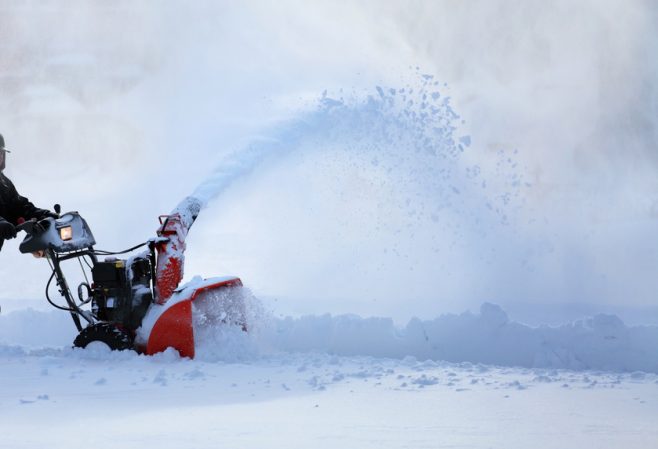 So I wake up on Saturday morning, leap from my bed and get all worked up and raring to go, ready to wrap up, don scarf, hat, gloves and drag my precious Austrian Langlaufschuhe and poles out of the loft, all set to strap them on my feet and head bright eyed and sharp-witted into the wintery wilds of a barely recognisable London to get hold of some rare and much needed rations of milk, mushrooms and smoked bacon.

Then I throw up my blinds and what do I see? A wintery wonderland? A white carpet of crisp crystals waiting for the first imprint of a snow shoe? A wandering polar bear sniffling at my privet? No. Grey. Dull. Spitting. What happened to the hoary hoo ha? At the end of last week we had a brief flurry of the white gold but nothing to write home about. Especially not if your home is Up North where they laugh at us in their droves every time we go into a apocalyptic fit over a two minute hailstorm or fall that drops 1mm of snow on the roof.

Some called it ‘Thundersnow’ but I didn’t hear any thunder, just the distant sound of Londoners panic buying Artisan bread and sparkling water in case they got shut in for 24 hours. Drew in his nicely timed and nicely written blog on Thursday was quite rightly warning people to take care and be prepared but we do rather overreact in the capital every time a weather forecaster mentions the words ‘flurry’, ‘snow storm’ or ‘winter woolies’.

Anyway. They always seem to get it wrong. According to red topped clarion of news The Daily Mirror online, police in Craigavon in Ireland have put up a wanted poster and issued a warning to their local weatherman who got it wrong and predicted snow that didn’t come. This is pretty much how people used to react to soothsayers who wrongly predicted disaster. You would think they’d be grateful.

But I was promised snow too and, like the responsible, grown-up that I am, I decided if the snow wasn’t coming to me, I was going to go to the snow.

So I ignored Drew’s warnings and drove (carefully of course) up to visit my folks up where they did have a fair bit of snow. There was snow everywhere. It was all rather lovely, picturesque and Christmas cardy where they live and my Father had had his log splitter going thirteen to the dozen. (The ever popular MD 4-Ton Electric Horizontal Log-Splitter – natch’ ) so we were logged up to the nines and snuggly and warm on Saturday evening.

But then Sunday came and Daddy decided it is high time to clear the side-patio of snow, murmuring strange and worrying things about a ‘winter barbecue’ (I don’t think so. Snow I love. Freezing sausages not so much). He then started dropping hints about his ‘new piece of kit’. Eventually I asked what is it. He does his best ‘aha that’s my secret’ face and tells me to go and look in the woodshed.

Now woodsheds have always freaked me out (It’s partly that Divine comedy song – ‘Something for The Weekend’ – I think, but there is also that well-known phrase ‘Something Nasty in The Woodshed’. I know it is actually an idiom meaning some nasty hidden secret hidden, but ever since I first heard it I can’t get werewolves and zombies and Vampires and other things with pointy teeth out of my head.

Well I needn’t have worried – there was nothing with sharp teeth apart from my father’s fab, quiet and powerful cordless Redback Chainsaw (Merry Christmas from My Mother, clever girl) which sat gazing at me benevolently.  But the reason he sent me there was to see his new toy and there in the corner it sat. And what a tasty toy it is. He has bought himself a brand new petrol snow blower (using my limited discount no doubt) the very same Oleo-Mac Artik 56 EL jobby of which Dick has been singing the praises. Yes.

And what’s more. In true ‘I just got a new bike’ style, I had to barter with him to let me have a go on it. Now I owe him a new pair of thermal gloves (to be fair I borrowed his over Christmas and lost them at a party…oops)  It it was only a quick go of course, because he hadn’t had a chance to use it yet and he was beaming like a teenage football player scoring a hat-trick on his debut.

However, it was worth every penny. It’s such fun, walking through the snow, not a care in the world, breaking up ice, clearing a path through the garden like a pro and womanfully resisting the urge to direct the powerful stream of broken snow at the neighbour’s cat – which used to hiss at me and steal my smoked salmon blinis and which I have never liked.

I loved using the snow blower  and it’s a good powerful machine. Look at Dick’s lovely blog from yesterday if you want to

Here’s a quick snap of the machine. It’s a jolly red, very easy to use and £100 below the RRP (at £599) and if you live anywhere outside London, in the countryside where it really snows and people actually do get trapped in their homes, where ponds freeze over and the local supermarket isn’t just across the road, where cold means cold and firewood is a proper currency, believe me, it’ll be worth it’s weight in gold one of these days.