As the UK's leading garden machinery store, we are constantly expanding our range of goods with new, innovative and exciting products to take advantage of new technologies and engineering developments. Just as plant breeders come up with new varieties each year and expand their offerings so machinery companies develop and refine their lists, so here…Continued
December 1, 2015 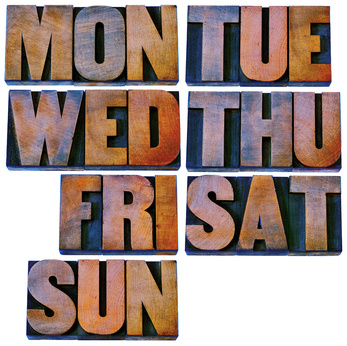 In our esteemed colleague Dick’s blog yesterday, he mentions Black Friday and Cyber Monday and as ever suggests a few jolly good bargains from MowDirect’s pretty fab collection of BF deals.

But what, ultimately, does it all mean. Why is it Cyber Monday? Are silver cyborgs about to emerge from London’s sewers barking ‘delete’ in voices borrowed from a Kraftwerk single? No. Of course we all know it’s because that’s when everyone goes online and tries to buy all their Christmas presents so they never have to go outside again. And we all benefit from Black Friday,especially when you look at some of the deals available However, it throws up a question (for me anyway as I’ve nothing better to do). What is this thing with days of the week suddenly feeling lonely and hitching up with adjectives? In the spirit of the Black Friday/Cyber Monday combo and because I have very little to say of any significance (so what’s new?) I have collected a batch-ette of other Weekday/Adjective combinations that you may or may not know.

Sparkly, bright 1985 pop hit for American, all female band, The Bangles, sung by Susannah Hoffs, a stunning short young woman with shocking big hair who makes men of a certain age (like my Father) rather hot around the collar. Penned by pocket-sized pop star,  The artist formerly known as the Artist Formerly Known As Prince (or Squiggle for short, or even Prince) the song pretty much describes my life and most people who have had one too many campari and sodas on a Sunday night will identify with the lyrics.

See also Blue Monday, New Order’s massive cult hit, the official most depressing day of the year (3rd Monday in January) and a title used by oodles of other musicians including the Dave Clarke 5 (before my time).

A famous Rolling Stones song that for me, (whose folks played it endlessly) never came to life until covered and sung by gravelly voiced, beautiful, child of the sixties hippy girl Melanie Safka.  Melanie, in turn, herself had a cover version of one of her own songs released – ‘Brand New Key’. Sadly it wasn’t quite as influential or full as emotion as Ruby Tuesday, as anyone who has heard ‘I’ve Got A Brand New Combine Harvester’ by The Wurzels will attest.

Isn’t it always? Particularity if you want to do something outside. Middle of the week misery and the annoying knowledge that you are floating in the centre of the ocean of week like a shipwreck survivor in a life-raft. Perhaps a good day time for a Duvet Day?

This is a term that apparently appeared on college campuses, where students who had class free Fridays or just no classes in the morning, saw it as an excuse to go out a party on a Thursday… like students need an excuse.

Also a bi-monthly networking event in London for the residential development industry (anyone fallen asleep yet?).

A comedy/fantasy film made in 1976 starring Barbara Harris and Jodie Foster where a Mother and her teenage Daughter who don’t get on (show me the ones that do) switch bodies for no more reason than they wish it. Much hilarity and two remakes ensue.

A day of awareness in the USA for those people who suffer from narcolepsy – a condition where you can just fall asleep in the middle of something. And no, I’m not going to do any jokes on this or suddenly stop in the middle of a sentence.

Actually known as Ford Super Sunday now because of the endless need for things to be sponsored, this is a huge, live television event on Sky TV on a Sunday where chaps who used to play Association football watch chaps who now play Association Football playing lots and lots of Association Football. Then, wearing dubious shirts and sporting extraordinary hairstyles, they talk in excited voices, and a variety of regional accents, about offside decisions, ‘movement off the ball’ and Red and Yellow cards. Fascinating.

See also Sunny Sunday, a song by another of my Parents hippy favourites, Joni Mitchell.

So that’s my list, short and sweet like Prince. Personally I would like to see Black Velvet Friday where Guinness and champagne are half price in every pub and bar in this fair city. If I could only have that wish granted, but then I’m not Barbara Harris or Jodie Foster.  See ya.     Holly.