The new Spring edition of Living Woods Magazine, contains a very special section for us! Arborist expert and LWM writer, Rich Hare writes a chainsaw review on our very own Feider Chainsaw - Pro 45. Living Woods Magazine is a quarterly magazine for everyone who loves woodlands, trees and timber. You can subcribe for free…Continued
March 15, 2018 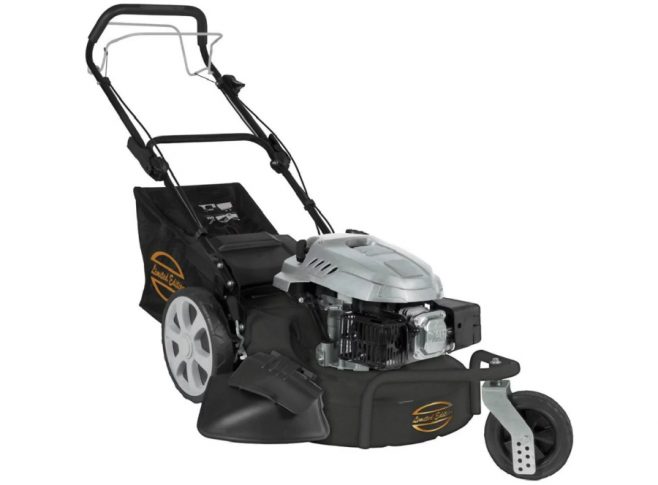 Now that spring has finally got in touch and told us it’s on its way as soon as it can get a cheap flight, gardeners from the most dedicated to the ‘Oh do I have to?’  are starting to rub their eyes, dust themselves off and think about the future of their lawns.

Now my excellent colleagues, Drew and Dick, know almost as much about lawnmowers as they do about beer and wine and Dick, in his detailed blog yesterday, was quite rightly singing the praises of the Einhell LE-PM 51S HWT Comfort-Turn Lawnmower.

Quite a simple idea. Manoeuvrability by design. This stylish and robust mower can get around your garden easily with its unique, three-wheeled design and is described by customers in such glowing terms as ‘brilliant‘, ‘excellent‘ and ‘very well built’.

So, showing three-wheels can be best, I thought I would compile one of my small but perfectly formed lists of things for no apparent reason. (I chose three – can’t think why. It seemed sensible at the time)

The Bond Bug. Sounds cool but this was nothing to do with 007 and I don’t think he would ever have driven one unless, possibly, it was Roger Moore’s Bond doing a somewhat lame comedy car chase with some wide-eyed English actress who squealed a lot (more of that in the Tuk-Tuk section). The Bug was the very early seventies, sporty-looking, two-seater three-wheeler with a canopy that lifted to allow the driver and passenger access, whereupon, presumably, they lit up cigarettes, didn’t put on seat belts and talked about the latest episode of Van Der Valk.

Perhaps more interesting is that Luke Skywalker’s well-used and battered land speeder from the original Star Wars movie was built around the chassis of a Bond Bug with some mirrors cleverly used to hide the wheels. ‘These are not the wheels you’re looking for‘;

The Tuk-Tuk. Anyone who, like me, has had the unique experience of perambulating at a fairly decent speed through the colourful clamourous streets of Bangkok or Mumbai in one of these will know what I mean when I say ‘WOW’ and then ‘AAAAAAGHHHH’. A weird mixture of terror and exhilaration as the fearless driver manages to eat, drink, drive and give you a running commentary in fluent English

while simultaneously risking his and your life every time he gets so close to a bus you think they are going to mate. Named Tuk-Tuks because of the sound the two-stroke engine makes, the Tuk-Tuk has become something of a global icon. One famously appeared in Octopussy, (for me the ‘Phantom Menace’ of the Bond franchise).

You can now buy Tuk-Tuks in the UK, hire them for weddings (I love the idea of turning up at a society Austenesque country church wedding in a Tuk-Tuk) or for TV shows, conferences and promotional events and they are to be seen working in the streets of Brighton. There are even and plans to bring them to London. Bet the taxi drivers won’t like that.

The Trotters. Number one for me just has to be the Trotter’s grubby, yellow Reliant Regal Van. Only Fools and Horses was around when I was pretty young, but one of my friends, Finchley Finola, has become a big fan, having snapped up a BBC boxed set in a Hampstead charity shop in an idle moment between looking for designer shoes and non-bobbly cashmere.  Aside from us late adopters, surely everyone of a certain age remembers the trusty three-wheeler owned by down-on-their-luck brothers Del Boy and Rodney. It was painted on the side with the unforgettable legend ‘Trotters Independent Trading Co – New York, Paris, Peckham’.

There were, according to the BBC, around six of these used in the series ‘Only Fools and Horses’ and, every now and then, one of them pops up at an auction and sells for more money than you would expect. One was sold to an anonymous bidder in 2017 and the hammer went down at 37,000! Lovely Jubbly!

So that’s it for my list. As I said, short and sweet. If you are interested in the fabulous freewheelin’ three-wheeler the Einhell LE-PM 51S Mower, take a look at this page

‘Great Service and very helpful staff. Required some assistance on what lawnmower to buy spoke to the MowDirect sales staff and they gave me helpful advice on what would be best for my garden. Placed my order mid-morning and arrived at 10 am the next day, superb service and would use again.’ L. Anderson (TRUSTPILOT)