The new Spring edition of Living Woods Magazine, contains a very special section for us! Arborist expert and LWM writer, Rich Hare writes a chainsaw review on our very own Feider Chainsaw - Pro 45. Living Woods Magazine is a quarterly magazine for everyone who loves woodlands, trees and timber. You can subcribe for free…Continued
November 22, 2016 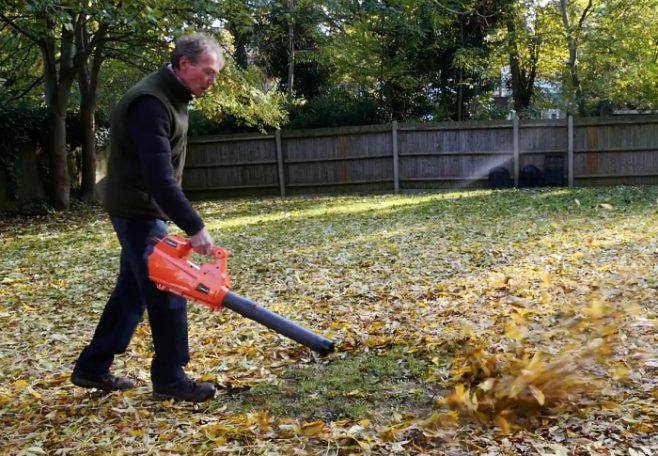 Last Friday was not a good day. I blew it. My old, mains electric leaf blower I mean. It went up in a big puff of smoke. I wasn’t asking that much – just the usual blast here and there. But no. It has gone to the great mulcher in the sky.

Frankly, it wasn’t that much cop in the first place. I was given it by a gardening sympathiser; came out of a Christmas cracker I suspect. It did the job OK – and it sucked as well as blew – a somewhat useless feature. Just how much crap, gravel and mud do you want to hoover up in the rather modestly-sized bag along with the leaves? Beyond that it was large, noisy and cumbersome, and of course that maddening cable snagged on just about everything, especially my feet.

Now what, I wondered? I was in mid-flow in a customer’s garden, and the job’s just gone bang. The borders were a tangle of scruffy rosemary and I couldn’t get a rake in there. Do it by hand then?

But not so fast (or slow, in the case of a by hand). Only a few days before, my mate Rob from MowDirect had asked me to have a play with a brand new cordless Redback blower with a 40-volt lithium battery which he wanted to road-test and film for the MowDirect website.

I’ve seen my fair share of 1970s product videos and There was a time when a scantily-clad young lady would have been drafted in for such a task, but Rob was happy enough for me to do the posing – on condition I scrubbed up first. I resisted the urge to dress scantily, not least because we were out there on a decidedly brassy autumn day – and using the machine was nowhere near hard enough work to keep warm in such conditions.

So off I went to the MowDirect office, blagging cap in hand. And 20 minutes later, I was back in business, armed with the Redback.

Firstly, size and weight. The Redback is about one-third of the size of my old blower, making it much easier to get into those tight corners around the rosemary. In terms of weight, even the most fragile of gardeners would have had no problem with this machine.

Secondly, noise. Rock guitarist Brian May, no stranger to generating the odd din himself, has got a point about the “horrible intrusion” generated by noisy leaf blowers. The Redback was nowhere near as bad as the machines that grace the girls’ school playground directly across our back garden fence each morning at this time of year – no small consideration.

And thirdly, of course, you are not dealing with yet another potentially temperamental little two-stroke engine. One press of a button (well, three actually, if you want to use it on maximum power), and off you go. And no snagging cables either!

But finally, and most importantly, does it do the job? Well maybe there are other blowers out there with as much puff as the Redback, but this machine is no slouch. A fully charged battery will afford at least 30 minutes blowing on full gusto – and if your garden is so large that 30 minutes is not enough, then the battery will recharge in no more than an hour  – time enough for you to bag up what you’ve cleared, have a cuppa, and carry on.

Just one small snag: I’ve borrowed MowDirect’s demo model since the demo and sooner or later, I’m going to have to hand it back.

Who knows? Perhaps Santa will be so impressed with our leaf-free garden at home that something will come down the chimney next month.

Now there’s a thought. I wonder if it does chimney sweeping as well …

Bruno Dore has been an allotment site secretary in North London for more than 15 years (and a tenant for 20). He is also a professional gardener with several years of experience under his workbelt and a long list of happy local clients.