The new Spring edition of Living Woods Magazine, contains a very special section for us! Arborist expert and LWM writer, Rich Hare writes a chainsaw review on our very own Feider Chainsaw - Pro 45. Living Woods Magazine is a quarterly magazine for everyone who loves woodlands, trees and timber. You can subcribe for free…Continued
March 24, 2015 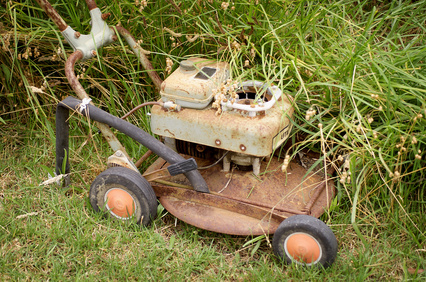 Yes. It finally happened. My trusty old Mower – Patrick – has hung up his blades, shuffled off his metal coil and gone to the great lawn in the sky. Sniff. I shall miss his reassuring rattle, his alarming cough and his eccentric ability to stop dead in the middle of the lawn and refuse to carry on like a tired toddler in a shopping centre.

So. What to do? A new mower is obviously in order and I shall get to that later. But do I dump him, unceremoniously, in a skip? Get him recycled? Sell him to someone on e-bay ‘as seen’ (see my previous blog). Or…

1.  Deck him with flowers and place him in a quiet spot in the garden as a floral curiosity.

3. Take his tyres off and put him in the front garden with an old sofa and open a book on how long it will be before my left-hand neighbours call the local Councillor.

4. Use him as a barbell, picking him up and down gently for half an hour a day to build up my biceps and tummy muscles.

5.  Cut him in half, mount him in two glass cases full of formaldehyde and apply for a bursary to Goldsmiths claiming to be the next Damien Hirst.

…or maybe not. Mind you, Lawn Mower art is alive and well. Just look at what I picked up at a car boot sale. I’m fairly sure it’s an original, in which case I’m off to Barbados….

What do you think? Anyway. Back to my quandary.  A new lawn mower. Scary! I really wasn’t sure what to do initially so I called Drew, promised him a couple of pints of  Tiddler’s Radical Ale and he gave me some very sound advice.

First of all,  he advised me that with my fairly small urban garden I don’t really need a huge petrol beast and a ride-on for my London domicile would be way over the top, although I’ve always rather fancied swanning about on one waving at the chaffinches like a member of the Royal Family.  I do want something with a rear roller, as I absolutely love smart, British, stripes on the lawn and they are a great help because I can follow them back in the direction of the house when I’ve had one too many Pimms of a Friday night and I’m in danger of being lost in the back of the garden by the gazebo.

The new addition is probably going to be a smallish mains electric as I don’t have too many problems getting power out to the lawn and don’t have obstacles preventing me…apart from the discarded Pimms’ jugs and the occasional Uni’ mate who forgot to follow the stripes of course.

The alternative would be a cordless. I’m all for moving forward and taking the technological bull by its ergonomically designed horns and there are some smart looking little battery powered machines out there that I’m sure would do the job.

Anyway. That’s my choice I suppose. If anyone has any further advice, do pop it on our Facebook page. The only thing I need to decide on now is where to buy it…. as if!