The new Spring edition of Living Woods Magazine, contains a very special section for us! Arborist expert and LWM writer, Rich Hare writes a chainsaw review on our very own Feider Chainsaw - Pro 45. Living Woods Magazine is a quarterly magazine for everyone who loves woodlands, trees and timber. You can subcribe for free…Continued
January 27, 2015 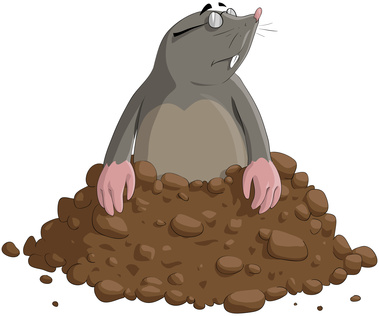 I have, in my wisdom, at the dawn of this new beginning that is 2015, decided that I have been getting far too serious. I’ve been studious, informative and academic. I’m sorry. It’s just not me. So. Enough. We have older, wiser and, let’s face it, balder and uglier writers who can do that. From now on you’re going to see a new Holly, a brighter Holly, a jolly Holly if you like. With that in mind….

If you are the proud owner of a flat and beautiful lawn, all candy-striped and neat, grass cut sharp and short like a marine’s barnet and lovingly and carefully tended every week, the very last thing you want to see is a bunch of molehills popping up and turning your lawn into a Swiss cheese.

First, let’s make sure we know what we are talking about…

Right. Now that’s settled. Very soon those little velvet-waistcoat wearing rascals will be sticking their heads out to see what’s going on, becoming again the bane of gardeners everywhere. Subsequently, many gardeners and lawn lovers want to get rid of them. After extensive research it seems to me that most interested parties have come to the conclusion that the only real way to dispose of moles is to use traps and humanely destroy them.

So, at the end of this piece I am including a link to the RHS website where there is a comprehensive list of mole control methods including the afore-mentioned deadly mole traps.

However, in the meantime, here is a light-hearted look at six real and not-so-real methods (I’ll let you guess which is which) for getting rid of moles, and some theories as to why they might not work.

1. You can buy hi-tech electronic devices from some garden centres and on mail order, which produce a high-pitched buzzing noise designed to drive moles away. However, some experts believe moles are actually attracted to annoying high frequency sound and as evidence point to the phenomenal sales of Kylie Minogue records in mole communities.

2. There is a kind of mole-repellent smoke, known commercially as ‘Pest-Stop Biofume Mole Smoke’. This can only be used by professional pest-controllers and the fumes can effectively drive moles away. Unfortunately in some cases it can lead to addiction, and before you know it they’re making their own roll-ups, drinking cider out of cans, swearing at your neighbours and trying to cadge some spare change when you walk across the lawn.

3. Moles are notoriously short-sighted. Try luring them out of the garden with offers of cheap laser surgery or a two-for one deal at Specsavers.

4. You could hire a pest-control professional. They know what they are doing, they have all the gear and they ‘take care’ of the mole so you don’t have to. But be careful how you advertise for your mole assassin. You start sending out e-mails about assassins and moles and you could wake up to find half of the secret service on your lawn.

5. You could try dressing up as a rat and inviting your mole to go on a gentle adventure along the riverbank, including a picnic in a boat, a trip to the Wild Wood followed by an all out assault on the weasels and stoats who have squatted in Toad Hall. By the end of this the mole will be so exhausted and far from home he’ll never be able to find your lawn.

6. Last but not least, wait until they pop their heads out of their holes and hit them on the head with a mallet…hmmm, that gives me an idea for a game….

If all else fails, this link to the marvellous and knowledgeable RHS will help you. Good luck!