The new Spring edition of Living Woods Magazine, contains a very special section for us! Arborist expert and LWM writer, Rich Hare writes a chainsaw review on our very own Feider Chainsaw - Pro 45. Living Woods Magazine is a quarterly magazine for everyone who loves woodlands, trees and timber. You can subcribe for free…Continued
August 28, 2014 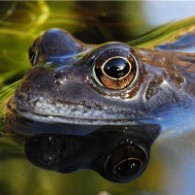 Adding a pond to your garden is a great way to help to protect the UK's wildlife – particularly as natural habitats are increasingly under threat.

In 2010, a series of reports was published on the state of the country's ponds, headwater streams and soils, which raised some serious concerns.

According to a survey conducted in 2007, ponds in England and Wales were widely degraded, with around 80 per cent rated as of poor or very poor quality, as measured by their composition of plants.

However, there were some positive signs. Between 1998 and 2007, an estimated 18,000 ponds were lost but 70,600 new ones were created. The new ponds were often of better quality and supported more plant species than older ones.

Creating your own water feature, then, could contribute to this trend – as well as giving you a chance to enjoy spotting some new wildlife.

Earlier this year, the Guardian predicted a bumper 2014 for frogs, due to the record rainfall and the unusually mild winter.

The frog is a common amphibian but is now largely dependent on garden ponds for its survival and flourishing. Much of their natural habitat has been lost due to the filling in of farm ponds and the overuse of chemicals on crops.

Many frogs have therefore packed their bags and headed to the suburbs in search of better prospects.

Key to their success is the large number of eggs they produce – females commonly lay 1,000 to 2,000 eggs. Unfortunately, in dry years, many of these fail to develop into frogs because the areas of water in which they are laid dry out too rapidly.

Fortunately, frogs have been one of the beneficiaries of the wet climate we've experienced in recent years. And many gardeners tend to encourage them, as slugs are one of their staple foods.