As the UK's leading garden machinery store, we are constantly expanding our range of goods with new, innovative and exciting products to take advantage of new technologies and engineering developments. Just as plant breeders come up with new varieties each year and expand their offerings so machinery companies develop and refine their lists, so here…Continued
October 31, 2017 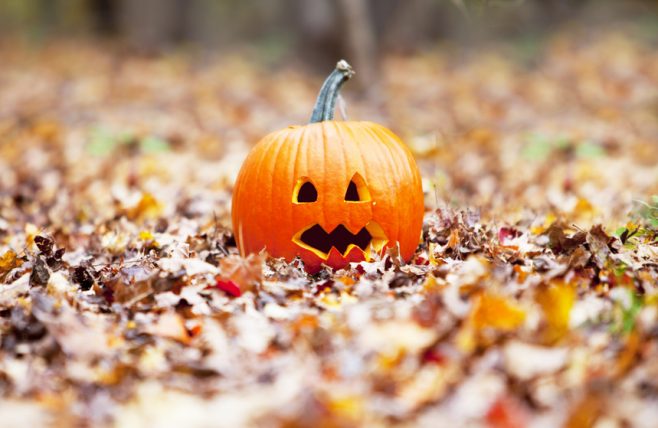 It is the scariest event of the year, no, no, I don’t mean the cast of Eastenders performing an under rehearsed dance routine on ‘Children in Need’, it’s HALLOWEEN. Wooooo! I think we may be painfully aware of this as you couldn’t really miss the VERY BIG CLUES across the TV over the last few weeks where every advert for everything from washing powder to well-known German supermarkets has been using cheesy Halloween iconography to sell its wares and every TV show has featured a Halloween special, as if Keith Lemon’s career, and Craig Revel Horwood’s face weren’t scary enough.

But, here I am joining in the fear-fuelled fun. Here is my own true (honest) halloween story. It started this weekend, a weekend where I promised myself I would do useful things. Practical things. Things to make my life better.

And did I? Did I, as I promised myself, clear up up the leaves in the garden? Did I take Drew and Dick’s advice that dead leaves left lying on the grass are unhealthy for your lawn and wet leaves on the path and patio are a slip hazard and should be cleaned up? I did not. I sat glued to the Blue Ray player, watching scary movie after scary movie and eating even scarier food.

Now. Bad dreams come and bad dreams go, but they sometimes stay and taunt and haunt you through the night and into the morning like acid indigestion.

At least they do if you’ve got an imagination like mine, stay up way too late, as I did last night, watching said horror movies, drink slightly too much red wine and pair it with a late supper of very good English cheeses bought from your local artisan shop (you know the type, the honey is more valuable than gold, the coffee comes from an obscure village in Nicaragua and vanilla pods cost the price of a house in Chiswick).  And talking of acid indigestion… Grooooo! as they used to say in my Father’s comics.

A night spent tossing and turning in the grip of the subliminal cranial terrors is no fun, but, once the feeling of “OMG. please get me out of here!” has gone, at least it shows you’ve got some spark of creativity in there.

The brain is a funny thing (have you seen one?) and in this particular REM, amygdala and cortex sponsored adventure from Dr Freakies House of Scariness I was minding my own business, dressed for some reason in a large Marks and Spencer’s carrier bag, sauntering through my local park at around midnight. I should have known I was dreaming as this is something I wouldn’t normally do as that park has a few late night residents you don’t want to meet at any time of the day, never mind at the witching hour.

I seem to remember that, against my better judgement, I was whistling something particularly eery like the theme tune to the X-Files, basically creating my own horror movie soundtrack, heading towards an old, creepy house at the end of the park (of course) when I heard a very disturbing rustling sound behind me. “Don’t be an idiot”  I hear you shout “You’re wearing a plastic carrier bag what do you expect!” But no. Twas not me. I turned to the rustling sound and, true to scary movie form, nothing was there. Just  a pile of fallen leaves, left there to rot by the ever vigilant and not at all idle park cleaners. Just a pile of leaves. Not rustling. Just lying there, the primary function of any given pile of leaves.

So I turned and walked again, still whistling. A few steps and again the rustling. I turn again. Again nothing. Was it a playful fox? A mischievous squirrel long past its bedtime?  Justin Bieber? (it was a bad dream remember). Still no sign of anything.

It is at this point in any horror film that everyone in the cinema or sitting room is screaming “Run. Run. Run now!” at the screen, in that “We know what is going to happen, we’ve seen the film” fashion.  “Run towards the old creepy house, what could go wrong?”

But did I run? Did I take notice of the post modern voice in my head that was created and nurtured by exposure to Wes Craven’s horror lampooning Scream movies? Did I Bergerac! I kept walking and whistling and, as was always going to happen as the rule of three rules supreme in horror as it does in comedy, the rustling sound occurred again

Again I turned. The leaves were still for a moment then the scariest thing happened. They moved, stirred, wriggled and slowly, inexorably, without any fuss, gradually formed themselves into a giant, looming, figure. There was nothing in the leaves. it was the very leaves themselves, come to life. I was transfixed, frozen in the moment. Frozen like a Ben and Jerry’s Cherry Garcia yoghurt. Scream? I screamed like fifty year old housewife at a Take That gig and, finally, ran. They weren’t dead leaves after all.  They were UNDEAD leaves!

The zombie leaf monster gave out a terrifying a roar like an angry toddler strapped into a pushchair and came after me. I ran faster, it ran faster, I stumbled for a second and, as I did, I felt its leafy breath on my neck, sickening whiffs of mould and decay reached my nose and I doubled my efforts, running even faster, but as I ran I could sense the leafy creep was gaining on me…and then… in the usual manner of screaming, fleeing heroines everywhere, I fell over for no good reason.

And as I fell, I felt the presence of the creature and I turned to see the grinning mouth of the leafy demon opening and swallowing me up, the dampness consuming me and the decay and cold working its way into my bones, sucking the life out of me. I wriggled, clawed, writhed but could not escape the dank and mouldy grip of my autumnal assailant.

And then I woke up, damp as a footballers socks from perspiration, to find I was, in typical fashion, tangled up in the duvet, the very cliché of a nightmare victim. It was only a dream. Phew.

I fixed myself some breakfast, and wondered if the false ending was about to kick in, but no, i was properly awake and the leaf-pile equivalent of Freddy, Jason and Michael was gone for good.

But I will tell you something for absolutely nothing.  In five minutes I am popping down the road, borrowing my friend Jonty’s splendid Billy Goat MV650H Multi-Vac Outdoor Vacuum and clearing up all leaves on my lawn.

After all, it’s Halloween tonight, and, dream or not, you can’t be too careful!  Have a good one.    See ya. Holly